Two mass shootings within 24 hours put the nation’s focus back onto gun control and, given the alleged anti-immigrant views of a shooter in Texas, elevate the issue of the dangers of hate speech.

Gun control has been a mostly peripheral theme on the Democrats’ 2020 campaign trail until now. Some have written it off as a lost cause after years of violent incidents with little policy response from lawmakers or others. It’s set to dominate Sunday morning talk shows, for starters.

Police on Saturday arrested a 21-year-old Texas man suspected opening fire with an assault rifle at a Walmart store in El Paso, Texas, killing at least 20 people. The suspect allegedly drove hundreds of miles from his near home near Dallas to carry out the attack in the heavily Hispanic city on the U.S.-Mexican border.

Authorities are investigating a possible link to an anti-immigrant document that surfaced online shortly after the killings, with anger directed against immigrants and specifically against Mexicans. Given that, the carnage gave a renewed impetus to critics of President Donald Trump’s harsh rhetoric on immigration. Three Mexicans were killed in El Paso shooting, Mexican President Andrés Manuel Lopez Obrador said in a Twitter video.

The two mass shootings in US elevate the issue of the dangers of hate speech. (Reuters)

Less than 24 hours after the El Paso shooting, a gunman in body armor killed at least nine people and injured dozens of others in a popular nightlife district of Dayton, Ohio, police there said.

Among the Democratic hopefuls due to appear on Sunday talk shows were Senators Cory Booker and Bernie Sanders; former Rep. Beto O’Rourke, who represented El Paso in Congress, and Pete Buttigieg, the mayor of South Bend, Indiana.

In a series of tweets, Trump called the El Paso killings “an act of cowardice,” saying there are “no reasons or excuses that will ever justify killing innocent people.” He was being briefed Sunday morning on the Dayton incident, the White House said.

Trump launched his presidential bid in June 2015 with a speech that slammed immigrants from Mexico as drug dealers, criminals and rapists. Since then, anti-immigrant rhetoric, and a focus on the U.S.-Mexican border, has been a centerpiece of the Trump administration.

The president has described the southern border as “a pipeline for vast quantities of illegal drugs including meth, heroin, cocaine and fentanyl.” He’s termed gang members “animals” and sent troops to the southern border to “stop the attempted Invasion of Illegals.” He’s also said in tweets and at rallies that the U.S. is simply “full.” 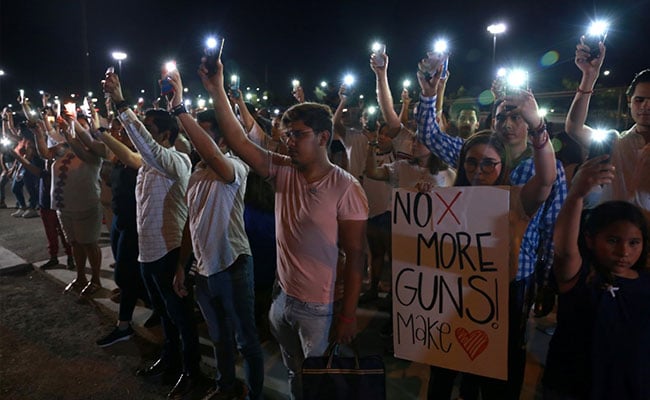 People take part in a vigil for 20 people killed in Texas shooting. (Reuters)

In recent weeks the president has stepped up racially charged rhetoric against Democratic lawmakers and others in an apparent bid to animate his base for the 2020 election.

O’Rourke left the campaign trail to return to his home town on Saturday, and drew a direct line from hateful speech by the president to violent acts. “Trump’s racism does not just offend our sensibilities; it fundamentally changes the character of this country. And it leads to violence,” he said.

Trump’s racial broadsides are now coming at such frequency and volume as to infuse and eclipse most other business and keep the issue foremost in voters’ minds headed into his re-election.

It was a multi-day Twitter attack by Trump on Rep. Elijah Cummings, a black Democrat from Maryland, that prompted the leaders at the National Cathedral, which has been the site of four presidential funerals, to post the essay, “Have We No Decency? A Response to President Trump,” on July 30.

“Violent words lead to violent actions,” the Cathedral’s three top religious leaders said. “They are a clarion call, and give cover, to white supremists who consider people of color a sub-human ‘infestation’ in America. They serve as a call to action from those people to keep America great by ridding it of such infestation.”

Walmart is “in shock over the tragic events” at the El Paso mall, the company said in a statement.

Congress failed to pass any meaningful gun restrictions in the wake of the 2012 shooting at the Sandy Hook Elementary School in Connecticut. The killing of 26 people, including 20 children between 6 and 7 years old, had been seen as a potential tipping point for measures to restrict access to firearms.

Trump moved to bar bump stocks, devices that allow a semi-automatic weapon fire like a machine gun, after a massacre at a Las Vegas concert in October 2017 killed almost 60 people. He also said after a mass shooting in Virginia in June that he’ll “seriously look” and banning gun silencers, but no action on that has been taken.