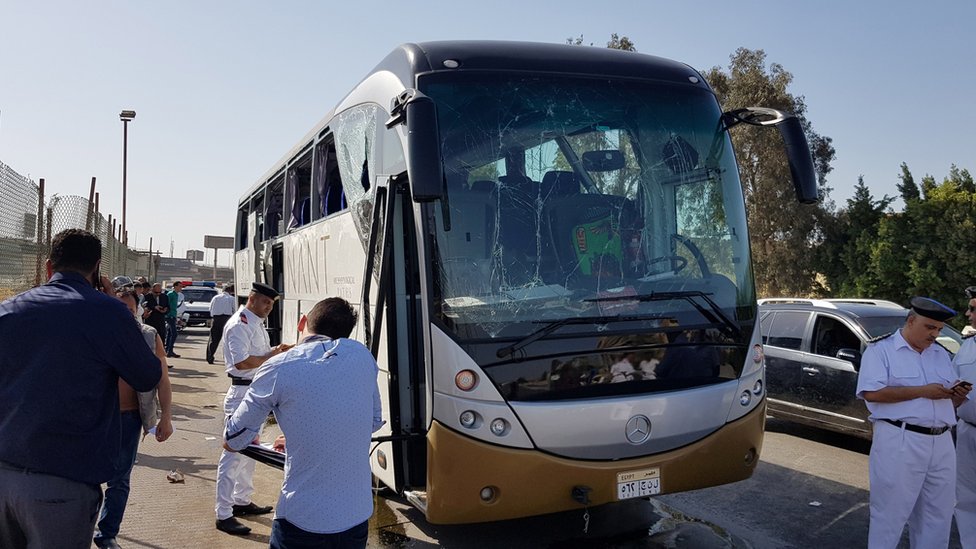 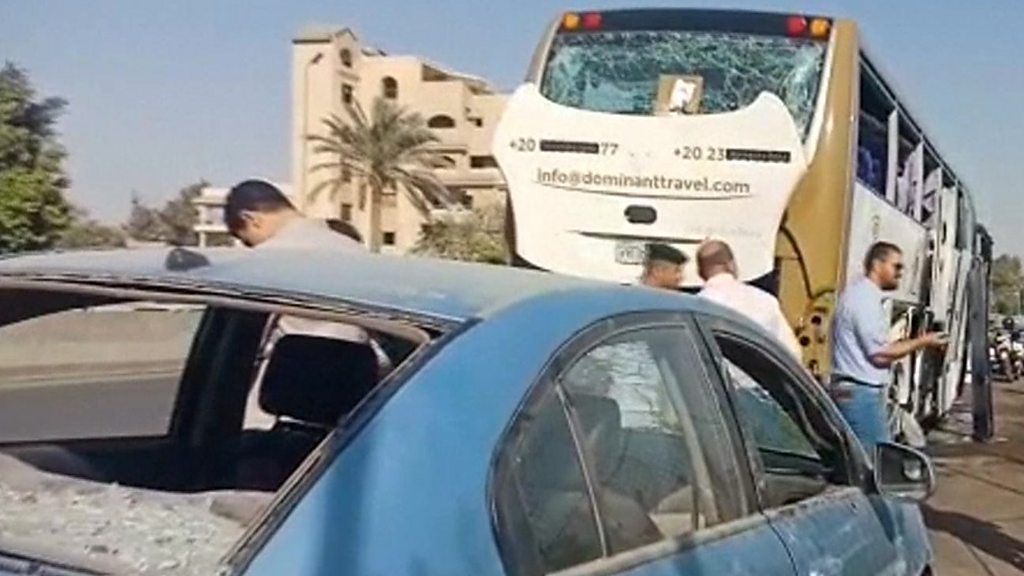 An explosion targeting a tourist bus has injured at least 16 people near the Grand Egyptian Museum, next to the pyramids in Giza.

South African tourists are among the injured. Most of those hurt suffered minor injuries, while three were treated in hospital, officials say.

A device went off close to the museum fence as the bus was passing.

It is not yet known who was behind the bombing but Islamist militants have attacked tourists in Egypt in the past.

In December, three Vietnamese tourists and a local tour guide were killed after a roadside bomb hit their bus.

What do we know about the blast?

A witness, Mohamed el-Mandouh, told Reuters news agency he had heard a “very loud explosion” while sitting in traffic near the site of the blast, which is close to the capital Cairo.

Images taken after police cordoned the bus show a vehicle with windows blown out or shattered, and glass littering the aisle inside.

A private car was also damaged behind the bus.

According to state-run broadcaster Nile News TV, the bus was carrying 25 South African tourists and a security source confirmed for Reuters that South Africans had been aboard.

The tourism minister said all of the people affected by the blast were being “fully supported in their onward travels”.

Egyptian officials hurried to confirm everything is under control. No life-threatening injuries, all the wounded in a stable condition, and no damage caused to the strategic tourist site. They wanted to send a clear message of assurance.

But it’s the second explosion in nearly six months near Egypt’s most important landmark, the Great Pyramids, and once again questions are raised about how adequate security measures are in such a strategic location.

The blast took place a few hundred metres away from the Grand Egyptian Museum, due to open next year. Officials confirm no damage was caused to the museum, expected to house the country’s top antiquities.

The timing of the explosion is quite critical. Egypt is getting ready to host the African Cup of Nations for football (Afcon) next month.

Furthermore, the tourism industry, a lifeline to the struggling Egyptian economy, recently started to recover. Recent official figures show that growth rates are on the rise and tourists are coming back. This vital sector was hit hard in 2015 when a Russian plane was downed over the Red Sea resort of Sharm el-Sheikh, with 224 people on board killed.

So the message behind this recent attack may be discouraging. No tourist comes to Cairo without visiting the Great Pyramids, and perhaps some of them might think twice now before heading to this historic site.