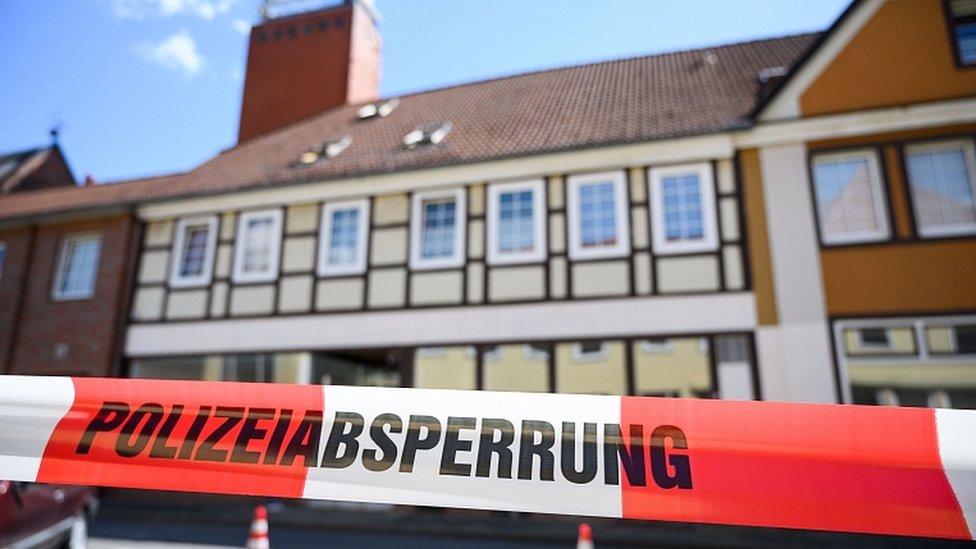 German police probing the deaths of three people shot with crossbow arrows in a rural Bavarian hotel near Passau have found two more female bodies in a flat 650km (400 miles) away.

The flat in Wittingen had been occupied by a 30-year-old woman who was one of the victims found in the hotel room.

The other two in the hotel room were a man and woman found in bed, hand-in-hand, impaled with several arrows.

There was no sign of a fight, nor of another participant, police said.

All five victims were resident in Germany.

Two crossbows were found lying in the hotel room and a third in a bag belonging to the group.

The couple found in bed were a man aged 53 and a woman aged 33, both from the western state of Rhineland-Palatinate.

The third victim, the 30-year-old woman, “was lying in front of the double bed and had one shot from a crossbow between the throat and the chin”, he added.

The German daily Merkur said that the 30-year-old woman was reportedly the sister of one of the women found in Wittingen. Merkur identified her only as “C” and said she had registered as an occupant of the flat in March.

The Wittingen discovery came on Monday, as police investigated the hotel room deaths.

Mr Feiler said it was not yet clear how long the bodies had been in the flat.

“The corpses were found because one of the neighbours heard about the reports from Passau and told police that the letter box of the flat was overflowing and that a strange smell was coming from the flat,” he said.

The relationship between the three victims in the hotel also remains unclear. They had booked a room with a double bed and single bed for three nights, checking in on Friday, without ordering breakfast.

The hotel is by the Ilz river near Passau, about 650km (400 miles) south of Wittingen.

Crossbows can fire either bolts or short arrows. Hunting with bows or crossbows is banned in Germany.

The first results of an autopsy are expected on Tuesday.

Another hotel guest, who was staying in the hotel for a short break, told local newspaper Passauer Neue Presse that it had been a “completely quiet night”.

Police have seized a white truck, parked outside, which has stickers reportedly linked to a hunting club. It was registered in Westerwald, Rhineland-Palatinate.

German media say one sticker has the letters FMJ – believed to be a reference to Full Metal Jacket crossbow arrows made by a US firm, Easton Hunting.

A hotel guest said the man had a long white beard and the women were dressed in black, and described them as “strange”.

On arrival on Friday evening they simply wished other guests a “good evening”, then went upstairs to their second-floor room with bottles of water and Coca-Cola, said the guest, quoted by Merkur.

In Wittingen a neighbour quoted by Merkur described the 30-year-old woman as “always a bit odd – always dressed in black, sort of gothic”.