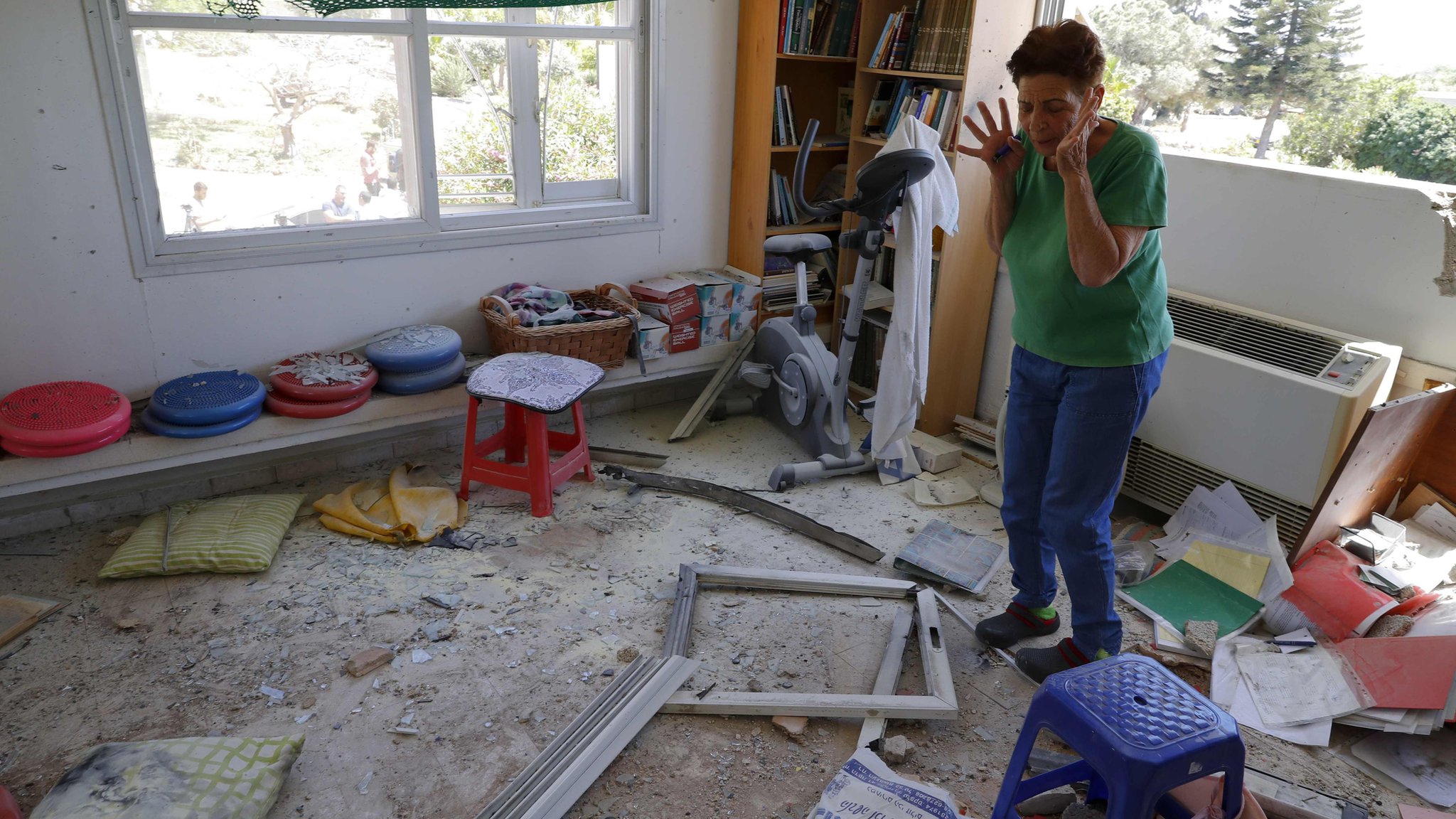 Militants in the Gaza Strip have fired more than 200 rockets into Israel, the army says, prompting air strikes and tank fire on the Palestinian territory.

Three Israelis were wounded by the rockets, while Israeli fire killed four Palestinians. including a mother and her baby daughter, Gaza officials say.

The flare-up followed a truce in the run-up to Israeli elections in April.

It marks yet another increase in hostilities despite attempts by Egypt and the United Nations to broker a longer-term ceasefire, says the BBC’s Tom Bateman in Jerusalem.

One of the air strikes has hit the offices of Turkish news agency Anadolu, prompting condemnation from Istanbul.

What happened on Saturday?

Several homes in parts of Israel bordering the Gaza Strip have been hit. Many residents rushed to bomb shelters.

The injured include two men in Ashkelon, 10km (six miles) north of Gaza, and an elderly woman in Kiryat Gat, further east.

The country’s Iron Dome missile-defence system shot down dozens of the rockets, the IDF said.

In response the IDF said it had launched air and artillery strikes against 120 Gaza sites belonging to Hamas, a militant group that controls the Gaza Strip, and against groups including Islamic Jihad. It blamed both for the attacks.

Palestinian officials say a 22-year-old man was killed. Reuters news agency quotes a small pro-Hamas militant group as saying he was one of their fighters.

The other deaths included those of a 37-year-old woman and her 14-month-old daughter who were killed in an air strike in the east of the Gaza Strip, according to Palestinian officials.

However, an IDF spokesman questioned whether an air strike had killed the mother and baby.

“According to indications the baby and her mother died as a result of the terrorist activities of Palestinian saboteurs and not as a result of an Israeli strike,” tweeted Avichay Adraee, without giving further details.

Turkey’s Foreign Minister, Mevlut Cavusoglu, condemned the attacks against civilians as “a crime against humanity”.

Turkish President Recep Tayyip Erdogan then also issued a condemnation of the Anadolu strike on his Twitter account.

Turkey and Anadolu Agency will continue to tell the world about Israeli terrorism and atrocities in Gaza and other parts of Palestine despite such attacks.

The Israeli military defended targeting the building in a statement, saying the structure was used by Hamas’s West Bank task force and as an office for senior members of the Islamic Jihad.

What triggered the latest unrest?

The violence began during weekly Friday protests in Gaza against the tight blockade of the area. Israel says this is needed to stop weapons reaching Gaza.

A Palestinian gunman shot and wounded two Israeli soldiers at the boundary fence. The IDF blamed Islamic Jihad for the shooting.

The Israeli air strike in response killed two Hamas militants. Another two Palestinians were killed by Israeli fire at the fence.

Islamic Jihad said it had launched the rocket attacks on Saturday in response to Friday’s violence.

Its statement also accused Israel of failing to implement last month’s ceasefire deal, which was brokered by Egypt.

“The resistance will continue to respond to the crimes by the occupation and it will not allow it to shed the blood of our people,” Hamas spokesman Abdel-Latif al-Qanoua said in a statement on Saturday. He made no explicit claim for Hamas firing the rockets.

About two million Palestinians live in Gaza, which has suffered economically from the Israeli blockade as well as recent foreign aid cuts.