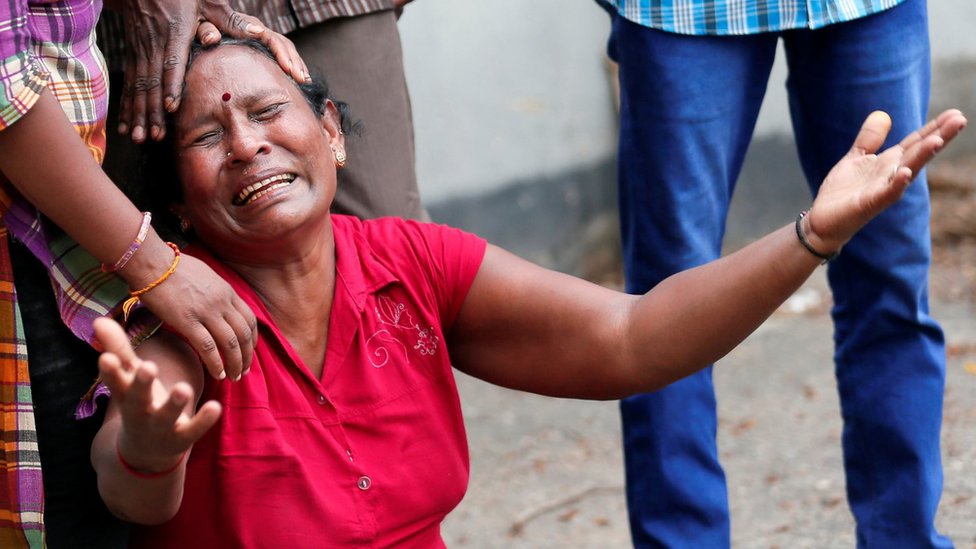 The death toll in Sri Lanka has soared to 290 after a wave of blasts hit churches and luxury hotels across the country on Sunday.

Police said 24 people had been arrested, but it is not yet known who carried out the attacks.

About 500 people are injured and at least 35 foreigners are among the dead.

The Easter Sunday bombings were the deadliest violence Sri Lanka has witnessed since the end of the country’s civil war in 2009.

Late on Sunday, Sri Lankan Prime Minister Ranil Wickremesinghe said security services had been “aware of information” of possible attacks but that the information had not been acted upon.

How did the attacks unfold?

The first reports of explosions came at about 08:45 local time with six blasts reported within a small space of time.

All the attacks were carried out by suicide bombers, reports said.

Police then carried out raids on two addresses and there were explosions at both. One was in Dehiwala, southern Colombo, and the other was near the Colombo district of Dematagoda in which three officers were killed.

The air force said an improvised explosive device – a 6ft-long [1.8m] plastic pipe packed with explosives – had been found and disposed of near the country’s main airport in the capital, Colombo.

Police have not provided a breakdown of how many were killed and wounded at each location.

What’s known about the attackers?

The government has urged people not to speculate about who could be behind the attacks and restricted access to social media in the aftermath of the bombings.

No information has been given on the identity of the 24 people arrested.

However, the BBC’s Azzam Ameen in Colombo says the bombers are thought to be part of a “radical extremist Islamist group” according to authorities.

Addressing reports that officials had had prior intelligence of forthcoming attacks, Mr Wickremesinghe said: “We must look into why adequate precautions were not taken. Neither I nor the ministers were kept informed.”

Who are the victims?

The vast majority of those killed are thought to be Sri Lankan nationals, including scores of Christians who died at Easter church services.

The ministry of foreign affairs says it believes 36 foreign nationals are among the dead, with most still unidentified at a Colombo mortuary.

The international victims include:

How has the world responded?

Pope Francis, in his traditional Urbi et Orbi speech at the Vatican, condemned the attacks as “such cruel violence” targeting Christians celebrating Easter.

A spokesperson for UN Secretary General António Guterres said he was “outraged” by the attacks, and expressed hope that the perpetrators would be “swiftly brought to justice”.

UK PM Theresa May tweeted that the “acts of violence against churches and hotels in Sri Lanka are truly appalling” and the Foreign and Commonwealth Office updated its travel advice.

Prime Minister Jacinda Ardern of New Zealand, where deadly mosque attacks killed 50 last month, said “collectively we must find the will and the answers to end such violence”.

Several prominent international monuments, including the Eiffel Tower, were dimmed or lit in Sri Lanka’s colours on Sunday night.

What is Sri Lanka’s recent history?

Sunday’s attacks were the deadliest in Sri Lanka since the end of the country’s civil war in 2009.

The war ended with the defeat of the Tamil Tigers, who had fought for 26 years for an independent homeland for the minority ethnic Tamils.

The nation has seen some sporadic violence since. In March 2018 a state of emergency was declared after members of the majority Buddhist Sinhala community attacked mosques and Muslim-owned properties.

Theravada Buddhism is Sri Lanka’s biggest religious group, making up about 70.2% of the population, according to the most recent census.

It is the religion of Sri Lanka’s Sinhalese majority and is given primary place in the country’s laws.

Hindus and Muslims make up 12.6% and 9.7% of the population respectively.

Sri Lanka is also home to about 1.5 million Christians, according to the 2012 census, the vast majority of them Roman Catholic.

Are you in Sri Lanka? Have you been affected by the attacks? Only if it is safe to do so, please contact haveyoursay@bbc.co.uk

Please include a contact number if you are willing to speak to a BBC journalist. You can also contact us in the following ways:

How to Make the Study of Consciousness Scientifically Tractable

Trump to test racing skills, mingle with supporters at Daytona 500