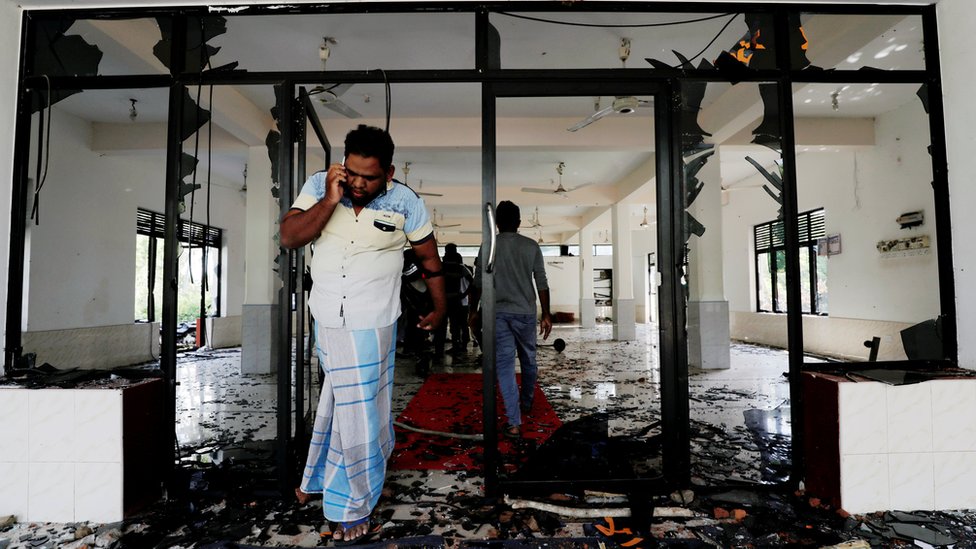 The curfew in the North-Western province will remain until further notice, police said.

Mosques and Muslim-owned shops have been vandalised or set on fire, and one Muslim man has been slashed to death.

In several towns, police fired into the air and used tear gas to disperse mobs.

Tensions have been high since Islamist militants attacked churches and hotels on Easter Sunday, killing more than 250 people.

In a televised address, Police Chief Chandana Wickramaratne warned that officers would respond to rioters with maximum force.

Prime Minister Ranil Wickremesinghe also appealed for calm in the early hours of Monday, saying the current unrest was hampering the investigation into last month’s attacks.

How did the violence unfold?

The unrest was centred on three districts north of the capital, Colombo.

In the north-western town of Kiniyama, windows and doors to a mosque were smashed and copies of the Koran thrown on the floor.

The attack was triggered by a group of people demanding a search of the building after soldiers inspected a lake nearby looking for weapons, Reuters news agency reports.

In the Catholic-majority town of Chilaw, Muslim-owned shops and mosques were attacked after a dispute that started on Facebook, police said.

A 38-year-old Muslim businessman identified as the author of the post that sparked the violence was arrested.

A man died from stab wounds after a mob attacked his business in Puttalam District, also in Sri Lanka’s north-west.

“Mobs had attacked him with sharp weapons at his carpentry workshop,” a police official told AFP news agency. “This is the first death from the riots.”

Incidents were also reported in the town of Hettipola, where at least three shops were reportedly torched.

How has the government responded?

The government says that security forces have restored calm to streets in the areas affected by violence and insist officers are preventing revenge attacks on Muslims.

“What we want to say is that the government is very determined to control this and from tonight onwards it shall be completely controlled,” Shiral Lakthilaka, an adviser to the president, told the BBC.

Leaders from across the political spectrum have been pleading for calm and urging people not to share rumours via social media.

Officials have blocked some social media platforms and messaging apps, including Facebook and Whatsapp, in an attempt to curb outbreaks of unrest.

“I appeal to all citizens to remain calm and not be swayed by false information. Security forces are working tirelessly to apprehend terrorists and ensure the security of the country,” the prime minister tweeted on Monday.

Nevertheless, there is concern among some Muslims that their fears about retaliatory violence were not acted on soon enough. One Muslim businessman, who wished to remain anonymous, told the BBC he feared for his safety.

“We can see many places where the curfew has been announced. The army is on the streets with guns, but they don’t take any action against the violence,” he said.

What happened on Easter Sunday?

On Sunday 21 April six near-simultaneous suicide bombs exploded at hotels and churches across the country. Hours later, two more bombs were detonated, with fewer casualties, as police closed in on those behind the bombings.

More than 250 people were killed in the wave of the attacks which stunned the world and the country – Sri Lanka was weeks away from marking 10 years of relative peace since the end of its brutal civil war.

Police have blamed two local Islamist groups for the Easter Sunday bombings and dozens of arrests have been made in the weeks since. The Islamic State group has said it was involved but has given no details.