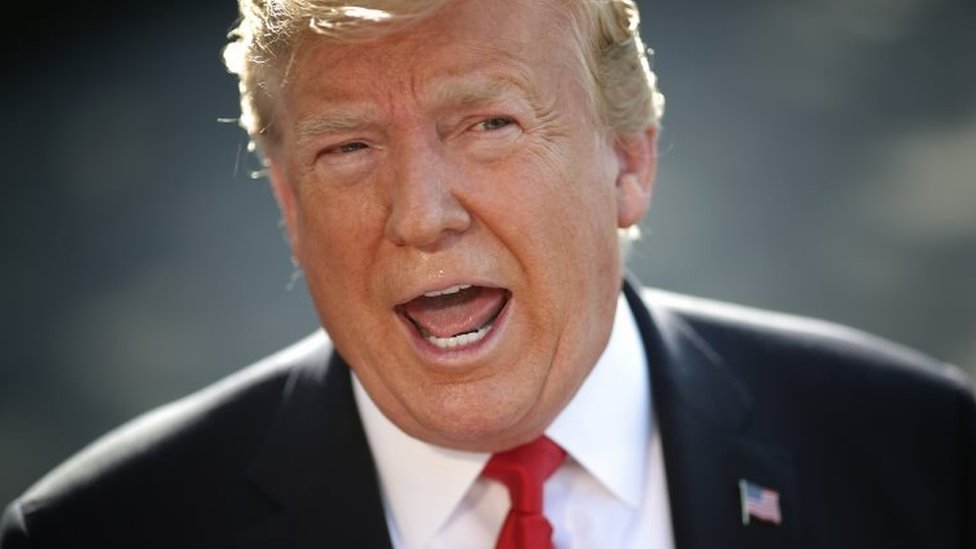 He said the man who led the inquiry into alleged Russian interference in the 2016 US election had “wanted to be the FBI director, and I said ‘no'”.

The president also claimed the two had had a “business dispute”.

Mr Mueller reiterated on Wednesday that his inquiry did not exonerate Mr Trump of obstruction of justice.

Following Mr Mueller’s comments – his first public statement on his inquiry – Democratic presidential candidates called for the Republican president to be impeached.

But the Democratic leadership of the House of Representatives is sceptical of such a move. And any attempt to remove the president from office would almost certainly be rejected by the Republican-controlled Senate.

He said Mr Mueller was a “true Never Trumper”, referring to his Republican critics during the 2016 White House race, and that his investigation was “a giant presidential harassment”.

Mr Trump also referred to the special counsel’s team of investigators as “some of the worst human beings on Earth”.

The Greatest Presidential Harassment in history. After spending $40,000,000 over two dark years, with unlimited access, people, resources and cooperation, highly conflicted Robert Mueller would have brought charges, if he had ANYTHING, but there were no charges to bring!

He claimed Mr Mueller had approached him at the Oval Office in 2017 seeking to regain his former position as FBI director.

The president said: “Robert Mueller should never have been chosen because he wanted the FBI job and he didn’t get it and the next day he was picked as special counsel.”

But according to the Mueller report, former White House strategist Stephen Bannon told investigators that the special counsel had not gone to the White House job-seeking.

On Thursday, the president also told reporters he had “a business dispute” with Mr Mueller.

It was not clear what Mr Trump was referring to, but in 2011 Mr Mueller suspended his membership with a Trump-owned golf course in northern Virginia.

Afterwards, Mr Mueller requested to have his annual dues refunded but never heard back from the Trump Organization, according to a Washington Post report from last year.

In a tweet earlier on Thursday, Mr Trump seemed to say for the first time that Moscow had played a role in helping him to get elected, while disavowing his own involvement.

“Russia, Russia, Russia! That’s all you heard at the beginning of this Witch Hunt Hoax… And now Russia has disappeared because I had nothing to do with Russia helping me to get elected,” he wrote.

Russia, Russia, Russia! That’s all you heard at the beginning of this Witch Hunt Hoax…And now Russia has disappeared because I had nothing to do with Russia helping me to get elected. It was a crime that didn’t exist. So now the Dems and their partner, the Fake News Media,…..

What did Mueller say?

Mr Mueller – who was FBI director under President George W Bush – made his first and only public comments over the two-year investigation in a statement to media on Wednesday.

He said that charging a sitting president with a crime “is not an option” due to a long-standing US Department of Justice policy.

“If we had had confidence that the president clearly did not commit a crime, we would have said so,” Mr Mueller declared in a live broadcast, contradicting Mr Trump’s claims of exoneration.

The special counsel’s 448-page report issued in April did not establish that Mr Trump conspired with Russia to sway the White House election, but listed 10 possible instances of obstruction of justice by the president.

After a brief presidential ceasefire, hostilities against Robert Mueller have resumed.

The president is clearly irked that Mr Mueller grabbed headlines yesterday when he reiterated the results of his investigation that were far from exoneration for the president.

In the immediate aftermath of Mr Mueller’s report, the president had claimed complete vindication – and even agreed that the special counsel had acted honourably.

The picture wasn’t as rosy once the report’s details were made public, however. And while Mr Mueller declined to determine whether the president had obstructed the investigation, his “I can’t say he’s not guilty” conclusion was damning in its own way.

So the president is going back on the attack, ensuring – if there were ever any doubt – that Mr Mueller, his report and subsequent action by Congress will continue to be mired in partisan warfare.