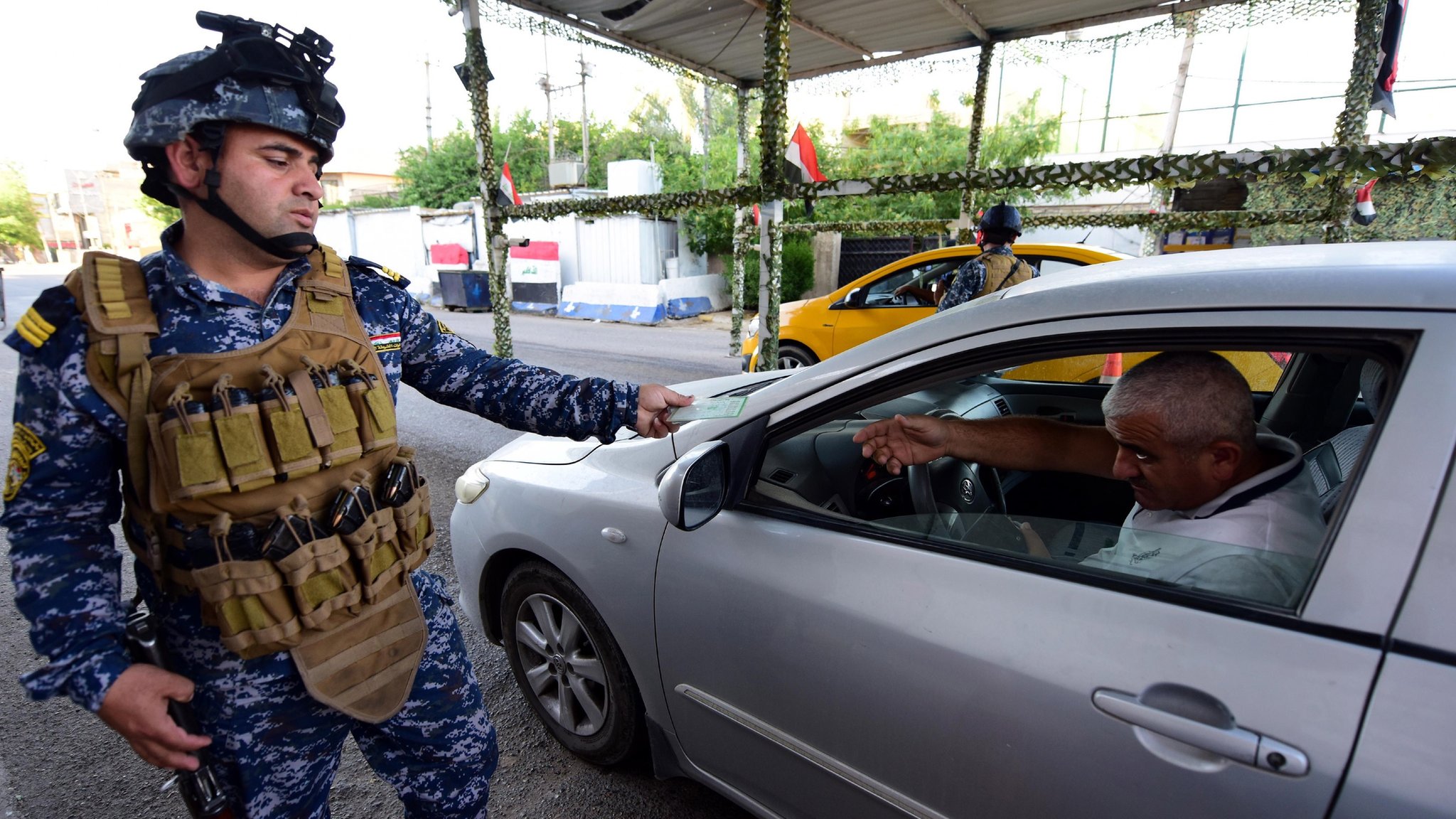 The US state department has ordered the departure of “non-emergency employees” from Iraq, amid rising tensions between the US and Iraq’s neighbour Iran.

Staff at the embassy in Baghdad and the consulate in Irbil must leave as soon as possible on commercial transport.

The US military said on Tuesday that the threat level in the Middle East had been raised in response to intelligence about Iran-backed forces in the region.

It contradicted a British general who had said there was “no increased threat”.

Chris Ghika, deputy commander of the global coalition against the Islamic State group, had told reporters that measures in place to protect US forces and their allies from Iran-backed militias in Iraq and Syria were “completely satisfactory”.

President Donald Trump, meanwhile, took to Twitter to dismiss rumours of White House infighting over his “strong policy in the Middle East”, adding: “I am sure that Iran will want to talk soon.”

Why is the US evacuating staff?

A state department spokesman said: “Ensuring the safety of US government personnel and citizens is our highest priority and we are confident in the Iraqi security services’ [ability] to protect us.

“But this threat is serious and we want to reduce the risk of harm.”

The US military’s Central Command also talked of “identified credible threats available to intelligence from US and allies” when it publicly disputed Gen Ghika’s comments in a Pentagon briefing on Tuesday.

The UK Ministry of Defence stressed that Gen Ghika’s “sole focus” was the enduring defeat of IS, and that he had made clear there were a range of threats to forces in the region that required very robust protection measures.

Germany’s defence ministry said on Wednesday that the German army had suspended its training programmes in Iraq.

A spokesman said the ministry had received indications of potential attacks supported by Iran, but that there was no specific threat to the 160 German troops involved in the training operation.

Fears of war fever in Washington

It’s pretty much unheard-of for the US military to criticise a senior British general serving alongside them.

Perhaps intentionally, Gen Ghika said what most British government ministers feel: that there is currently no threat to American or Saudi shipping from Iran or its surrogates.

The worry is in London that President Trump and his national security adviser John Bolton are making a deliberate effort to work up a new war fever about Iran.

The obvious comparison is with 16 years ago, when President George W. Bush’s administration launched its invasion of Iraq.

But Iran is a hugely different and far more powerful opponent than Saddam Hussein’s Iraq.

And even there, although Iraq put up little serious resistance to a conventional attack, the war there quickly turned into a guerrilla campaign. During that, the US came close to being defeated outright.

Do we know anything about the alleged threat?

Not yet. But Reuters news agency cited Iraqi security sources as saying that during a visit to Iraq earlier this month US Secretary of State Mike Pompeo told Iraqi commanders that intelligence showed Iran-backed paramilitary fighters were positioning rockets near bases housing US troops.

“The message from the Americans was clear. They wanted guarantees that Iraq would stop those groups threatening US interests,” one of the sources was quoted as saying. “They said if the US were attacked on Iraqi soil, it would take action to defend itself without co-ordinating with Baghdad.”

Iraq’s Prime Minister, Adel Abdul Mahdi, said on Tuesday that its security forces had not observed “movements that constitute a threat to any side”.

Paramilitary groups trained, armed and advised by Iran have played an important role in the battle against IS in Iraq. They were formally incorporated into the Iraqi security forces last year, but continue to operate semi-independently.

Spokesmen for two of the groups told Reuters that the talk of threats to US forces was “psychological warfare” by Washington.

Why have US-Iran tensions escalated?

It was also reported on Tuesday that US investigators believed Iran or groups it supported had used explosives to damage four tankers off the coast of the United Arab Emirates on Sunday. Large holes were found in the hulls of the tankers, but no evidence has been released showing a link to Iran.

Saudi Arabia meanwhile said that drone attacks on two oil pumping stations by Yemen’s Houthi rebel movement, which is supported by Iran, had forced it to temporarily shut the main East-West Pipeline.

However speaking to the BBC, one of the rebel leaders Mohammed Ali al-Houthi denied they were acting on Iran’s behalf, but were instead defending themselves against the Saudi-led collation.

Earlier this month, the US sent an aircraft carrier and B-52 bombers to the Gulf.

There were repeated warnings from Washington justifying the military build-up, based on what Mr Pompeo described as an “escalation” in activities by Iran.

It came after the US ended exemptions from sanctions for importers of Iranian oil.

Iran has vowed to overcome the measures, but its economy is sliding towards a deep recession and the value of its currency has plummeted.